View Limiting devices, also sometimes known as “Foggles” or a “Hood” are to limit a pilot’s view so they can only see the instrument panel. They are used to train pilots to maintain aircraft control solely by reference to the instrument in the event of an accidental encounter with instrument conditions such as an inadvertent cloud incursion. Different styles of foggles or a hood work better for some people more than others. Some pilots who report experiencing nausea with foggles find the nausea abates when using a hood, or vice versa. A view-restricting device should never be used unless a safety pilot or trained CFI is in the cockpit with you, is current for flight, and is appropriately seated in the aircraft.

These are my foggles of choice. They use a velcro strap instead of ear pieces like eye glasses. They also flip up to allow a pilot to easily see out of the cockpit. A disadvantage is that you must remove your headset to wear them, then put your headset back out. They cost around $25. 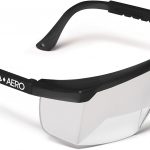 These are traditional foggles that have frosted lenses except for a small clear area at the bottom. They are relatively inexpensive at around $17. 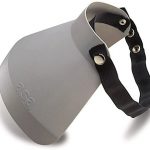 This is a hood style of view restricting device. It is easily donnable and has an adjustable strap. It is a relatively inexpensive choice at around $15.